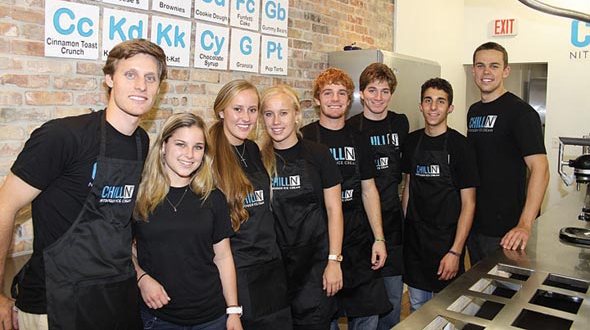 Chill-N Nitrogen Ice Cream based in Pinecrest, Florida discovered an innovative chilling, or “Chill-N” process, that uses nitrogen to serve made-to-order cups and cones. Amid the 2020 pandemic, Chill-N graciously avoided a melt-down and continued to grow their sales through delivery – a true sign of innovation.

Chill-N Nitrogen Ice Cream based in Pinecrest, Florida discovered an innovative chilling, or “Chill-N” process, that uses nitrogen to serve made-to-order cups and cones. Amid the 2020 pandemic, Chill-N graciously avoided a melt-down and continued to grow their sales through delivery – a true sign of innovation.

Staying Cool in the Sunshine State

Rarely do we hear of Gators and Hurricanes collaborating, but co-founders Daniel Golik (University of Florida) and Chuck Woodward (Miami) teamed up in 2012 to bring a new chill to their home state of Florida.

Ice cream is traditionally shipped in and served out of tubs or bags from a major production facility with an expiration date just months in the future – until now. Daniel and Chuck wanted to make the first made-to-order ice cream which required more than a traditional freezer or soft serve machine. They thought back to their high school chemistry classes and eureka! The periodic table gave them a different perspective on how they can accomplish the cool they needed through nitrogen. The natural chilling agent is much more powerful than a traditional freezer and gives Chill-N the flash freeze it needed to make MTO ice cream. This discovery shaped more than the thousands of cups and cones they have served – it shaped the entire ice cream industry.

We hosted Daniel Golik on the GOAT Factory Podcast to hear about the ins and outs of innovating in a well-established industry and franchising with a new-to-market freezing process.

Daniel grew up just miles from what would one day be Chill-N’s flagship shop in Pinecrest, Florida. His entrepreneurial mindset was shaped early on as he explains his family’s “all hands on deck” attitude toward building their family business over the years. Daniel’s first business idea happened when his father said “things just don’t sound the same anymore”, as a light went off in Daniel’s head. His first venture made use of his 90’s adolescence as he looked at ways to innovate past mp3 players with analog audio. Daniel founded his first brand called Neuhaus Labs who tied the knot between old-school technology and new-school capabilities through tube amps.

Upon shutting Neuhaus’s doors, Daniel already had his eyes set on ice cream. He took his entrepreneurial skills to the foodservice industry with his buddy Chuck and opened their first 680 sq/ft shop and quickly expanded to three additional locations within just three years of operation. Daniel quickly became overwhelmed with the business their new ice cream was getting from around Florida – sometimes even staying open later for some that drove several hours to get a scoop. They needed to innovate.

As Chill-N grew, their customer base has done everything except melted and they needed to keep up with the demand. Daniel looked toward automating their freezing process to increase output and reduce wait times for their guests – this would also allow them to franchise the business easily as the process would be more user-friendly.

In just 9 years, Daniel has expanded Chill-N from Pinecrest to 9 total locations throughout the State of Florida and receives calls every day for more franchise opportunities in and out of the US. From watching his father’s entrepreneurial mindset to building a business of his own, Daniel has explored the world of innovation through ice cream. After years of pairing the right elements together, Chill-N is now a powerful compound franchising throughout the state of Florida.

In episode 008, Daniel provides amazing insight around innovation, automation, and expansion within the ice cream industry. He has and is still accomplishing his mission to bring a different type of chill to Florida. Check out the full episode now!