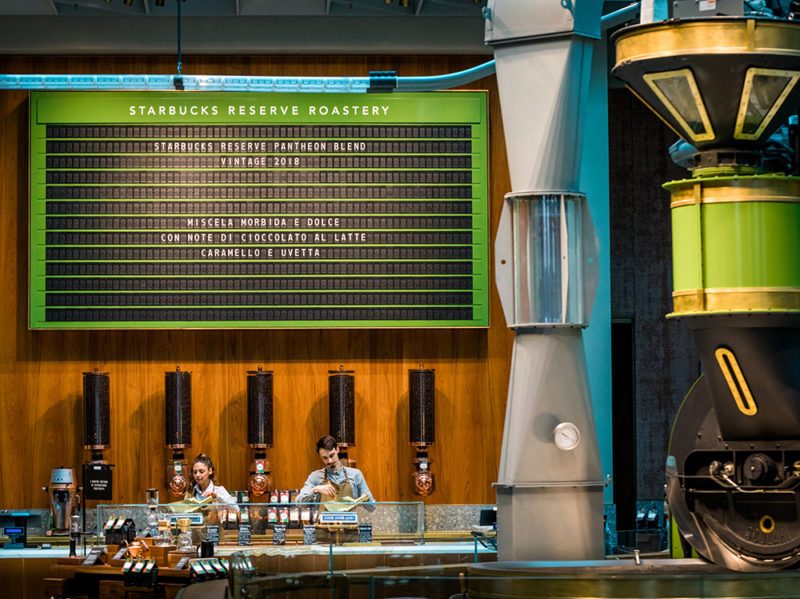 We have developed a love for Split Flap boards. Solari di Udine blessed us with a new way to display departure times in airports and train stations in the 1960s. These boards have become a staple to travel romance and design nostalgia because of their adverse functions in different settings. We now see boards flipping in restaurants, bars, coffee shops, and hotels to surprise and delight guests around the world. Check out some of our favorites we didn’t make.

The TWA Hotel isn’t your average airport terminal in 2020 with power outlets and iPads sprawling along every wall. Analog technology ruled 20th-century interfaces from alarm clocks to timetables. JFK housed a Split Flap board in every terminal displaying departure and arrival times when digital screens were only a thought. The TWA Hotel is home to the international flight hub’s last remaining Split Flap board. These departure boards were originally made by Solari di Udine out of Pasariis, Italy, creating an easy way to display everchanging information to travelers in airports and train stations across the globe. The Solari Board in the TWA Hotel hangs high above its restaurants, bars, and common foot-traffic areas giving their guests a glimpse of a groovy era.

The Seattle Roastery displays their Solari Board above the Main Bar; the workshop of Starbucks top Baristas and Connoisseurs. These coffee experts work with guests to discover what type of coffee fits their palette by offering tasting options. As these tasing options change daily, they use their Solari Board to display “Today Roasting” with a list of the exclusive brews the Reserve is offering. The board is not only an easy way to display everchanging information to customers, but it provides surprise and delight.

Milan, Italy. The birth country of the original Solari Board. Starbucks collaborated with the founders of this timeless technology to provide customers with an element with a functioning surprise and delight effect. The board is located above the Roastery’s scooping bar and overlooking the main lobby of the building. The Solari Board commonly displays a welcoming message to guests walking through the front door, and then flips to the daily roasts and blends that are offered throughout the Reserve. Milan is one of Italy’s top tourist destinations bringing 8.81 million people into the city of 1.3 million. Connecting travel and the roots of Starbucks Italian cafe culture could not have been done in a better way. Solari’s passion behind their boards is something that matches Starbucks dedication to providing the perfect cup of coffee.

Implementing an American Coffee Company in the heart of Japan required much more than slapping a Starbucks logo on Nihon Kenchiku architecture. The coffee company needed a way to connect the Japanese people to the Starbucks coffee culture. Minor changes were made to the Starbuck Reserve in Tokyo but one thing stayed the same. Solari Board. The Solari Board in this Reserve serves as the eye-catching display of daily events and style of roasts offered.

The Changi Airport donated 1 of their 2 departure boards to the National Heritage Board of the Singapore Government upon an expansion and renovation project in the terminal. The boards provided a romantic welcoming to guests throughout its life in the Singapore airport, but is now in the process of deinstallation. When the plans to remove the Split Flap displays hit the media, travelers and citizens flooded the terminal to get one last look at the display to revive the nostalgia of analog technology in today’s digital age.