Bringing fresh seafood to the state of Arizona is no easy task, unless you’re Buck & Rider. Located in Arcadia, just north of Tempe and Phoenix, is a seafood oasis at the base of Camelback Mountain. Buck & Rider flys fresh seafood every single day from the Atlantic and Pacific coasts, giving Arizonans a little taste of the salt life. Their menu ranges from Maine Lobster to Georgia Shrimp, Alaskan King Crab to California Halibut, and everything in between.

Buck & Rider opened their doors in 2015 with a goal to deliver fresh catch to the Scottsdale area. They generated buzz by highlighting their efforts to fly fresh seafood each day – not a small feat when you’re surrounded by miles of the southwestern desert. Their non-seafood claim to fame is their LGO Reserve Beef – the first in Arizona to be awarded a private label USDA certification. The beef is a very rare cut out of the midwest where just three in ten cattle meet the criteria to be considered. The name stems from LGO Hospitality, which runs several restaurants throughout Arizona and California. They say they wouldn’t put their name on anything they don’t stand by.

As unique as seafood in the southwest can sound, Buck & Rider didn’t want to stop there when designing their interior. The space has a classic vibe – dark leather booths, light wood tables, and earthy-colored walls. It’s all class from the second you enter the door until you sign your check. Buck & Rider needed a way to display their many menu items without overwhelming their guests, and a Split Flap fit the bid. Their six-row by forty-column display hangs in their dining room displaying specials, seafood platters, and their acclaimed LGO Reserve beef – it’s hard to take your eyes off this one. They requested seafoam green vinyl flaps to seamlessly blend the retroelement into the rest of the elegantly designed and branded space. 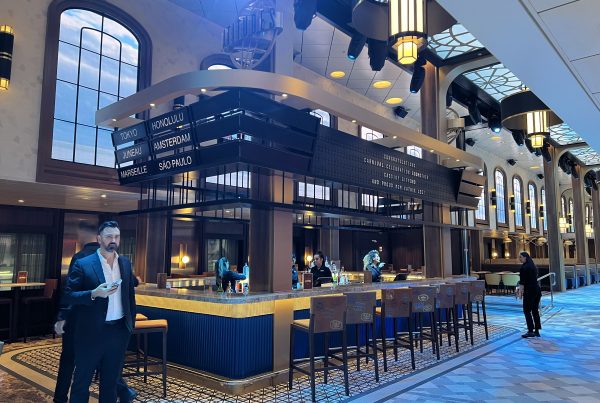