After the wild success of the Momofuku Noodle Bar in New York City’s East Village, celebrity chef David Chang recently launched his second location to rave reviews in the Time Warner Center at Columbus Circle, a bustling skyscraper and premier shopping destination. Continuing to evoke the hip ambiance of his first restaurant, the new uptown location is a souped-up sophomore effort that excites every sense with sights, smells, sounds, textures and flavors.

Standing out in New York – which has around 24,000 eateries – requires restaurateurs to offer excellent food, but also provide a novel environment where guests feel like there’s something special, such defining architecture or exciting design elements.

To help guests savor every moment and to create a unique dining experience that aligns with their already successful brand, the visionaries at Momofuku considered every aspect of the new restaurant, starting with the menu. That’s how they landed on an Oat Foundry Split Flap display: a new modern take on the nostalgic ‘train station board’ that serves as an engaging focal point for all dining patrons.

The Oat Foundry Split Flap display delivers uniqueness in spades, giving guests an ‘Instagrammable’ moment as soon as they walk through the doors of the new Momofuku Noodle Bar. As local foodies and sightseers bustle into the space – which looks like an updated take on the classic diner aesthetic – they’re introduced to the comforting ‘thwip-thwip-thwip’ of the rotating flaps that evoke a feeling found outside of mid-20th-century train stations and airports.

The custom-designed display has 4 rows of 32 flaps that constantly rotate menu items with pricing and availability updates (since top items often sell out due to popularity). When flaps on the board are unoccupied by letters or numbers, they each display the Momofuku peach logo, adding a cool branding opportunity. 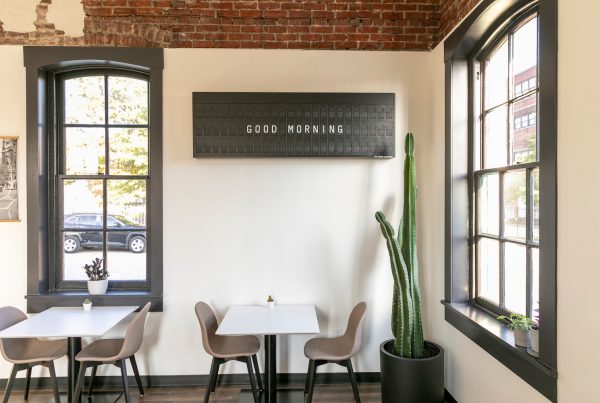